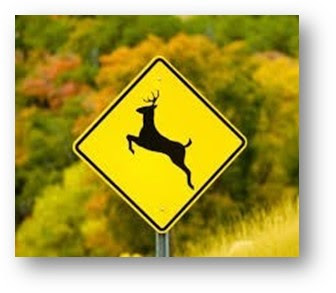 It is deer mating season in New Jersey and it is also daylight savings time. That is a combination that makes the NJDEP Division of Fish and Wildlife and the New Jersey Department of Transportation remind motorists to drive with extra caution and watch for white-tailed deer.
Deer are more likely to suddenly run onto roadways during this time of year – known as the fall rut -- as bucks pursue does, risking the possibility of colliding with a vehicle. Increased deer activity is more likely to occur in the early morning and around sunset, when visibility may be difficult.
“Deer are involved in thousands of collisions with motor vehicles in New Jersey each year, with the highest number occurring during the fall mating season,” Division of Fish and Wildlife Director Dave Golden said. “We urge all drivers to be especially alert to the possibility of deer suddenly darting onto roadways and to be aware of things they can do to reduce the risk of a collision and possible serious injury to themselves or their passengers.”
Peak mating season for deer in New Jersey runs from late October throughout November and into mid-December in all areas of the state.
Reduced lighting as well as sun glare can make it very difficult for drivers to see deer that are about to cross the road. In addition, multiple deer may cross the road at any moment, usually in single file.
These tips can help motorists stay safe during the fall rut:
For more information about white-tailed deer in New Jersey, visit www.njfishandwildlife.com/deer.htm.

Posted by Ken Ronkowitz at 8:30 AM

Email ThisBlogThis!Share to TwitterShare to FacebookShare to Pinterest
Labels: deer