North American cougars - also known as pumas, catamounts and mountain lions - are actually the same species. The Eastern cougar (Puma concolor couguar) is the currently recognized subspecies that was historically found in the northeast U.S.

Eastern cougars typically have a little smaller heads than those found in the West, but are very similar to cougars in the western U.S.

The cougar has the largest range of any wild land animal in the Americas. They span from the Yukon Territory in Canada to the southern Andes in Chile. Officially, this species was extirpated from eastern North America, aside from Florida. But fish and wildlife officials have said that they may be recolonizing their former range in the northeast. Isolated populations have been documented east of their contemporary ranges in both the US and Canada

The cougar is a hypercarnivore that prefers large mammals such as mule deer, white-tailed deer, elk, moose, mountain goat and bighorn sheep, but they opportunistically take smaller prey such as rodents, rabbits and hares, smaller carnivores, birds and even domestic animals including pets.

Mark Dowling, co-founder of the Eastern Cougar Network, had at one time said that Eastern cougar sightings in the northeast were not real, but the situation has changed since that time. Eastern Cougar Network collects and disseminates data on the shifting mountain lion population. In an article provocatively titled "Mountain Lions Headed for Atlantic City?" Dowling said in 2003 that sightings in the eastern half of the nation were "almost certainly" escaped captives, but he added that the notion that (western) cougars "will eventually reach New Jersey" is a reasonable prediction, in part due to increased populations of white-tailed deer.

The Department of Environmental Conservation (DEC) in nearby New York states that "Eastern cougars (mountain lions) do not have a native, self-sustaining population in New York State. They have been absent from this state since the late 1800s."

However, they do say that there have been a few isolated sightings, but each sighting involved cougars that are not native to New York. A couple of sightings involved captive mountain lions that escaped from licensed facilities in the state, and another sighting involved a wild cougar that traveled through New York as it made its way nearly 1,800 miles east from its native population in South Dakota.

As with other states, the DEC gets many reports that are misidentification so their staff will only investigate reports where physical evidence of tracks, scat, or hair exist; or when a captive animal has been reported to have escaped. Most of the reports are cases of mistaken identity of other animals. Cougars are commonly mistaken for bobcats, fishers and coyotes, as well as domestic housecats and dogs.

In 2011, the USFWS opened an extensive review into the status of the eastern cougar and four years later they determined the eastern cougar no longer warranted protection under the Endangered Species Act. In January 2018 the de-listing became final and they were officially declared extinct.

According to the Center for Biological Diversity, "The eastern cougar was extinct well before it was protected under the Endangered Species Act, as was the case with eight of the other ten species that have been de-listed for extinction."

So, the chances of you encountering a cougar in the wild here in New Jersey seem to be extremely rare. if not impossible. But you might encounter one in another state, particularly in the western U.S.  This warning sign is from California. It reads very much like the advice we have in NJ for encountering a bear. Hopefully, you would have the presence of mind to "be large, shout and fight back."

Posted by Ken Ronkowitz at 5:08 PM No comments:

The Invasion of the Southern Pine Beetle 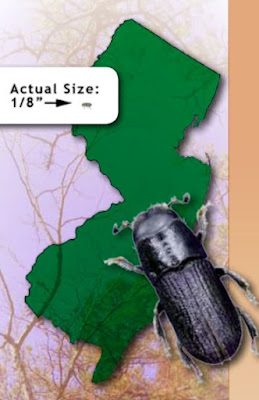 The southern pine beetle (SPB), one of the most destructive forest insects in the southeastern United States, quickly devastates pine-dominated forests during outbreaks. This native bark beetle, which is smaller than a grain of rice, feeds on the living tissue under the tree’s bark and introduces blue stain fungi.

As pine dominant forests cover an estimated 440,000 acres in southern New Jersey, this beetle poses a considerable threat to our state’s forest resource. Since its re-entry into the state in 2001, SPB impacted approximately 26,600 total acres, and more than half that total occurred in 2010 alone.

Since 2001, SPB populations in New Jersey have been on the rise, destroying 1000 new acres of pine forests each year on average, but infestations remained largely confined to the southern sections of the state.

Then, in 2008, SPB crossed the Egg Harbor River for the first time and entered the pine forests of Atlantic County, and continues to move north and west. 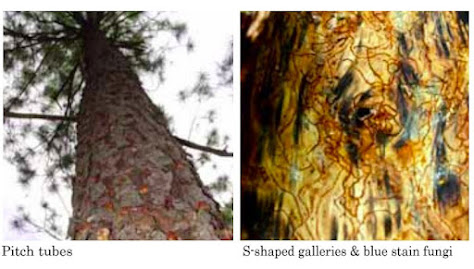 SPB attacks all pine species including pitch, shortleaf, loblolly, and Virginia, preferring trees weakened from drought, stress, or injury. The tree crown displays the first outward sign of
infestation when it rapidly turns from a healthy green to yellow, red, and finally, brown.
A closer inspection may reveal pitch tubes on the trunk and S-shaped galleries under the bark. The beetle also transmits blue stain fungi, which stops water from circulating in the tree.
To control populations and minimize the spread, foresters must detect and suppress infestations while the beetles still actively infest the tree. If untreated, beetles move quickly to adjacent forests. The best control option is to take down infested trees. This disrupts populations from expanding and destroys all life stages. If the infested trees cannot be sold to a sawmill, they remove the bark, buck the logs or chip the wood to kill the beetles in the trees.

How To Report a Beetle Sighting

VIDEO: The Invasion of the Southern Pine Beetle

Posted by Ken Ronkowitz at 9:30 AM No comments:

I don't typically write very much about cryptozoology, which some people call a science but most people consider a pseudo-science. Wikipedia defines it as the search and study of unknown, legendary, or extinct animals whose present existence is disputed or unsubstantiated. Such species are popular in folklore, including Bigfoot, the Loch Ness Monster, Yeti, or the chupacabra. The only one I would consider part of this site's domain is, of course, the Jersey Devil.

The Jersey Devil even figured into the plot of an episode of The X-Files TV series (Season 1, Episode 5) when Mulder and Scully track the legendary creature who is here a maneater that haunts the back alleys and woods surrounding Atlantic City. The "x-files" is definitely where we place this creature.

I haven't seen any recent sightings of the Jersey Devil in the news, but there are at least 13 places where it has supposedly been seen from Bridgeton to Haddonfield in 1859; to the New York border in 1899; and from Gloucester City to Trenton in 1909.

The legend is of a creature living in South Jersey. The Jersey Devil is also known as the Leeds Devil and is said to inhabit the Pine Barrens area.

Descriptions of the creature often describe a flying biped with hooves, with a horse- or goat-like head, leathery bat-like wings, horns, small arms with clawed hands, legs with cloven hooves, and a forked tail. It has been reported to move quickly and is often described as emitting a high-pitched "blood-curdling scream."

Earlier this year, I received an email from Corinne Adams who describes herself as "a maven of the Jersey Devil." Her interest is different from many people's because she is a descendant of Grandma Leeds. The folklore origin of the Jersey Devil points to Jane Leeds, known as "Mother Leeds," who had twelve children and, after finding she was pregnant for the thirteenth time, cursed the child in frustration, crying that the child would be the "devil."

The birth of that 13th child in 1735 was on a stormy night. The child appeared normal at birth but then changed to a creature with hooves, a goat's head, bat wings, and a forked tail. Growling and screaming, the child beat everyone with its tail before flying up the chimney and heading into the pines. Variations on the legend say Mother Leeds was a witch or that the child's father was Satan.

Corrine grew up in Northfield, NJ but her father, S. Earl Jeffries, told his kids about his grandmother, Grandma Leeds.

As part of the Scarlet Speakers from Rutgers series, I watched a program on the Jersey Devil by Angus Kress Gillespie, professor of American Studies at Rutgers University in New Brunswick. He is a Fulbright professor and a New York Times best-selling author. A Yale University graduate, he did his graduate work in folklore at the University of Pennsylvania in Philadelphia. The author of several books and numerous articles, Dr. Gillespie has a keen interest in the folklore of the Pine Barrens of southern New Jersey. Professor Gillespie has toured theaters, coffeehouses, libraries and schools all over the State of New Jersey with his unique interpretation of the legend of the Jersey Devil.

Posted by Ken Ronkowitz at 6:30 PM No comments:

Most Threatened Wildlife in Every State

Curious about what the Most Threatened Wildlife in Every State might be? It's an interesting list, but I'll save you the trouble of clicking through the pages if you want to get right to New Jersey. Their answer is the Leatherback Sea Turtle (ermochelys coriacea) and the Dwarf Wedgemussel (alasmidonta heterodon).

Posted by Ken Ronkowitz at 1:00 PM No comments: 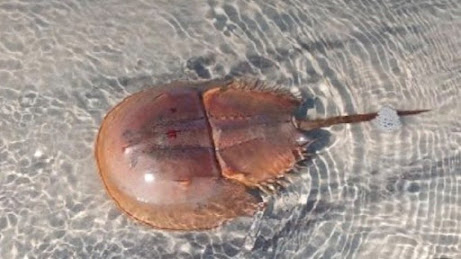 Horseshoe crabs in the Delaware Bay area play a vital role in the life cycles of migrating shorebirds. In the 1990s, horseshoe crabs were overharvested as bait, leading to dramatic drops in crab and red knot bird populations. Red knots are now listed as threatened under the federal Endangered Species Act.

New Jersey has tried to protect red knots for about 14 years by imposing a moratorium on harvesting horseshoe crabs for bait in state-controlled waters. (They can still be taken for their blood, which contains a chemical used by the biomedical industry.)

But a recent Atlantic States Marine Fisheries Commission (ASMFC) proposal would eliminate a longstanding policy decision not allowing the harvesting of any female horseshoe crabs until the populations of both crabs and red knots return to higher levels.

The American Littoral Society is urging citizens to add their voices to oppose the plan. Author and LBI resident Sandy Gingras has created an online petition at change.org/SaveHorseshoeCrabs to oppose the proposition that states:

The opposing view from the ASMF says that the proposed changes represent “a less than one percent chance of a red knot population decline due to the implementation of potential female harvest under the ARM Revision. Based on this analysis, the Service concludes that take, defined under the Endangered Species Act as killing or injuring of red knots, is not likely.”

The Atlantic States Marine Fisheries Commission is accepting public comments from now through Friday, Sept. 30. Comments should be emailed to comments@asmfc.org, with “Horseshoe Crab Draft Addendum VIII” in the subject line.

To learn more about horseshoe crabs, go to the Horseshoe Crab Recovery Coalition website at hscrabrecovery.org or the American Littoral Society website at littoralsociety.org/horseshoe-crabs.html

To find out more about red knots, go to the Cornell Lab of Ornithology website at www.allaboutbirds.org/guide/red_knot

More information on the FWS’s analysis of the ARM Framework Revision is available at fws.gov/media/us-fish-and-wildlife-service-evaluation-atlantic-states-marine-fisheries-commission-horseshoe

Posted by Ken Ronkowitz at 6:41 PM No comments: