Though New Jersey has many places that are called "mountains," we know that they do not compete with the western U.S. mountain ranges. Probably the best known NJ mountain area is the northwestern area where we find the Appalachian Trail.

But New Jersey also has the Watchung Mountains (once called the Blue Hills) which are actually a group of three long low ridges of volcanic origin, between 400 ft. (122 m) and 500 ft. (152 m) high, lying parallel to each other primarily in northeastern New Jersey.

All of the ridges lie to the east of the higher Appalachian Mountains, which in northern New Jersey are often referred to as the New York-New Jersey Highlands.

Together with the Appalachian Mountains to the west, the Watchungs pen in an area formerly occupied by the prehistoric Glacial Lake Passaic

The Great Swamp, a large portion of which is designated as the Great Swamp National Wildlife Refuge, is a remnant of this lake. The swamp area is presently retained by what we call the Third Watchung Mountain.

200 million years ago, magma intruded into the Newark Basin, then an active rift basin associated with the breakup of the supercontinent Pangaea. The magma formed large intrusions like the Palisades Sill. But the magma ultimately broke out to the surface through large, episodic eruptions and formed the Watchung Mountains. 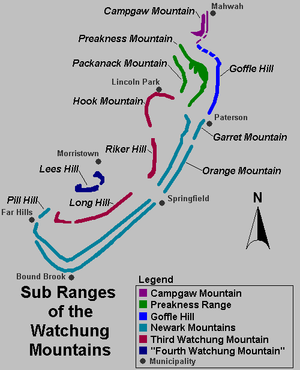 Throughout the early Jurassic period, the Newark Basin underwent extensive dipping and folding, and at the western edge of the Newark basin along the Ramapo Fault System formed alternating synclines and anticlines warped the layers of basalt and sedimentary rock. Jurassic sedimentary rock layers between and above the ridges form the Feltville, Towaco and Boonton formations.

If you drive on I-280 up or down the big hill in "The Oranges", you see the cliffs that consist of a single massive lava flow that cooled and cracked into columnar joints.

In some locations, the joints tend to radiate away from a central core in a pattern generated by an uneven cooling pattern in the flow. There are also complex areas in the middle of the outcrop that show a small normal fault that may have formed from seismic activity that occurred about the time that the flows were still cooling. There are also lots of boulders (glacial erratics) scattered in the woods along the hilltop.

The ridges once held back the westward spread of urbanization, forming a significant geologic barrier beyond the Piedmont west of the Hudson River. But in many places within the state, they are smaller islands of natural landscape within suburban sprawl.

Parks, preserves, and numerous historical sites dot the valleys and slopes of the mountains, providing recreational and cultural activities to one of the most densely populated regions of the nation.

The First and Second Mountains are often erroneously referred to as Orange Mountain and Preakness Mountain. "Orange" and "Preakness" more properly applies to specific geographic sections of these ridges.

A smaller fourth ridge exists south of Morristown and west of Third Watchung Mountain. This ridge lacks topographic prominence, only rising to about 100 ft (30 m) above the surrounding terrain and the only named portion (at Harding Township) is known as Lees Hill.

The original inhabitants of the Watchungs were the Native American Lenape. They referred to the mountains as the Wach Unks, or ‘high hills’. Evidence of the Lenape presence in the Watchungs can be seen in numerous camps sites that have been uncovered, mainly along the rivers coursing through mountains and in the small caves abundant in the volcanic rock.

It is thought the Lenape favored the Watchungs for their profusion of natural resources, including abundant freshwater rivers and streams, a variety of forests, and plentiful fish and game. They also took advantage of the rich soils and maintained many farm areas where they raised a variety of seasonal crops.

With the arrival of Europeans, the rivers and streams of the Watchungs also supported grain, grist, and saw mills. Later, the energy of these rivers would be harnessed for industry, most notably at the Great Falls of the Passaic River, where mechanical and hydroelectric systems exploited the energy of water falling over the face of First Watchung Mountain.

During the Revolutionary War, General George Washington used the protection of the Watchung mountains to erect the first and second Middlebrook encampment. This position on the high ground also allowed him to monitor the area between Perth Amboy and New Brunswick as well as to identify and disturb British movements between Manhattan and Philadelphia.

During World War Two, an anti-aircraft gun emplacement was made in Mills Reservation (Cedar Grove & Montclair) at the lookout point on the cliffs overlooking New York City. All that remains of this today is a circular cement platform.

In the twentieth century, the Hilltop in Verona, the highest point in Essex County, served as the site of a sanatorium for tuberculosis patients. The county hospital was built there because the high elevation provided clean, mountain air away from the cities to the east.

At the height of the Cold War, Campgaw Mountain was selected to house a Nike missile base. Installed on the mountain between 1955 and 1971, the base’s missiles served to guard New York City air space, standing by to intercept nuclear armed Soviet bombers. The facility ultimately was abandoned with the advent of intercontinental ballistic missiles. Two other missile sites were nestled into the forests atop peaks in Mountainside and Morris Township, creating a triangle of redundant sites.


There are many parks and recreational areas to visit along the Watchung Mountains.

Campgaw Mountain Reservation (First and Second Watchung Mountain) is the northernmost ridge of the Watchungs and its northern terminus is the Ramapo Mountains, near the New York border. A shallow gap separates its southern end from Preakness Mountain and Goffle Hill.

Nearby Garret Mountain Reservation is 568 acre park located within the Borough of Woodland Park (formerly West Paterson), although it also extends into the cities of Paterson and Clifton. The reservation covers the northernmost part of the First Watchung Mountain and reaches over 500 feet (152 m) above sea level.

Jersey born and raised (50 yrs lived there). Never knew so much of this. Raised in Union. Always thought the big hole in Union was from ice age. Guess we were well educated/taught in the 50's. Skated and sleigh rides ? rode ? at Galloping Hill so passed it many times.

Lived at Lake Hopactong for 13 years so was familiar with Lenni Lenape tribe, especially when they lowered lake for maintenance and valve got stuck open. So many Indian artifacts were discovered.

Thanks for posting this.

I lived right below the tower on Garret Mountain. The Castle was at the end of my street. What a magical place to grow up!