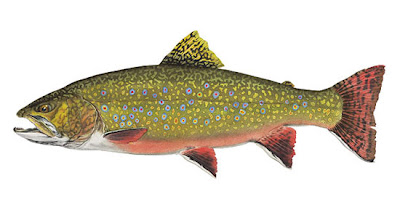 If you are an avid New Jersey angler, you can probably can distinguish a largemouth from a smallmouth bass and a brown trout from a brook trout. But even anglers might not know that most of our popular gamefish were introduced to our state for recreational purposes.

Northern pike, channel catfish, rainbow and brown trout, hybrid stripers, common carp, crappie and even bluegill are NOT native to New Jersey. Of the nearly 100 freshwater fish species that swim in our waters, only 65 of them are native.

Native does NOT mean a fish that was born in the wild - such as when someone says they caught "a native brown trout," (Brown trout are native to the British Isles and the European mainland, so New Jerseyeans catch wild brown trout.) So, just because that brown trout or largemouth bass reproduces in New Jersey waters, that does not make them native.

There are 85 species of freshwater fish found in NJ. Our bays, estuaries and marine waters can be home to 28 marine mammals and 336 marine finfish at some point during the year. This is an exceptional number of species for a state as small as New Jersey.

On that list of freshwater fish, you will find species identified as "exotic" (such as the Grass and Common Carp), "extirpated" (Longnose Gar), "native" (American Shad) and "introduced" (Rainbow Trout).