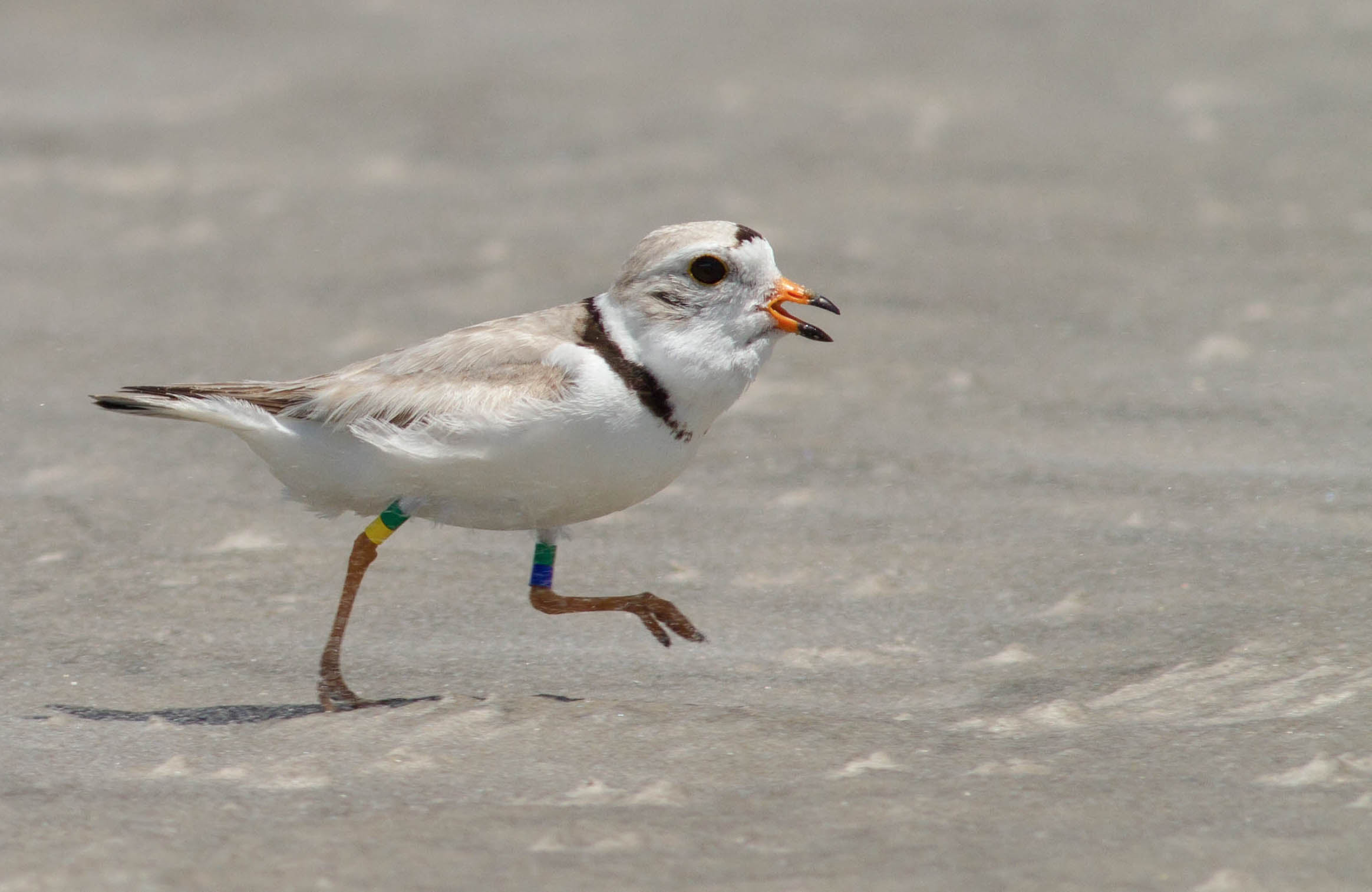 The NJDEP Division of Fish and Wildlife and the Conserve Wildlife Foundation of NJ have released the 2015 Piping Plover Breeding Report. The data reveals that the population of breeding piping plovers increased 17% to 108 pairs in 2015, as compared to 2014.

Despite the increase, the population of this federally threatened, state endangered species still remains below the long-term average (118 pairs) since federal listing in 1986 and well below the peak.

“The rebound in New Jersey’s piping plover breeding population and a second consecutive year of robust chick productivity was a much needed outcome,” said Conserve Wildlife Foundation Beach Nesting Bird Project Manager Todd Pover. “We need to continue our intensive management for a number of years to sustain any recovery, but we were very pleased to have finally broken the recent cycle of low nesting success and the record low number of nesting pairs in 2014.”

The piping plover – a small sand-colored shorebird that nests in New Jersey as part of its Atlantic Coast range from North Carolina up to Eastern Canada – face a number of threats, including intensive human recreational activity on beaches where they nest, high density of predators, and a shortage of highly suitable habitat due to development and extreme habitat alteration.

Federally listed as a threatened species in 1986, piping plovers have since recovered in some areas of the breeding range. Yet piping plovers continue to struggle in New Jersey, where they are listed by the state as endangered.

CWF, in close coordination with NJDFW’s Endangered and Nongame Species Program, oversees piping plover conservation throughout New Jersey. Staff and volunteers help erect fence and signage to protect nesting sites, monitor breeding pairs frequently throughout the entire nesting season from March to August, and work with public and municipalities to educate them on ways to minimize impacts. Although conservation efforts on the breeding ground remain the primary focus, in recent years, CWF has also begun to work with partners all along the flyway, in particular on the winter grounds in the Bahamas, to better protect the at-risk species during its entire life-cycle.

The statewide fledgling rate, which includes data collected by partners at 19 active nesting sites throughout the state, was 1.29 fledglings per pair, down slightly from 2014 (1.36 fledglings/pair), but still one of the highest statewide levels since federal listing. Furthermore, both years were above the 1.25 fledgling rate believed necessary to maintain the range-wide Atlantic Coast population of piping plovers.

Statewide pair-nest success, the percentage of pairs that successfully hatch at least one nest, was high at 79%, well above the average since federal listing. Although population and productivity are ultimately the most important measures of recovery success, hatch success is an important metric to demonstrate the effectiveness of on-the-ground management.

Northern Monmouth County, as a region, continued to account for the largest percentage of pairs in the state (55 pairs or 51%), with Gateway National Recreation Area – Sandy Hook Unit accounting for most of those pairs.

The region comprised of North Brigantine Natural Area and the Holgate and Little Beach Units of the Edwin B. Forsythe National Wildlife Refuge accounted for the other significant concentration of breeding pairs in the state (43 pairs or 40% of the statewide total).

Holgate had the largest jump in abundance for any individual site, doubling its breeding pairs to 24 in 2015 (up from 12 in 2014). This increase was the result of highly suitable overwash habitat created at the site by Hurricane Sandy and the high breeding success that helped spur.

Cape May County, the southernmost region of the state, consisting of Ocean City to Cape May Point, continued its long-term downward trend, accounting for just 8 pairs in 2015, compared to 11 pairs in 2014 and 43 pairs in 2004 at its peak.


For more information, including a link to the report, visit http://www.conservewildlifenj.org/blog/2015/11/19/piping-plover-population-rebounds-from-historic-low-in-new-jersey/ on the CWF website.

For information on Beach Nesting Bird Management in New Jersey, visit http://www.njfishandwildlife.com/ensp/bnbmgt.htm on the Division's website.
Posted by Ken Ronkowitz at 8:00 AM