Plastiki and Plastic Pollution in Oceans 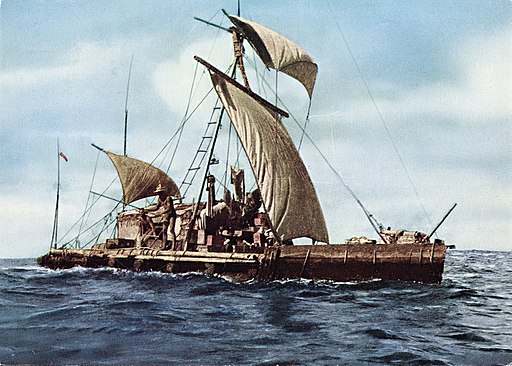 I posted on another blog of mine back in August about the anniversary of the 1947 landing of Thor Heyerdahl's raft Kon-Tiki on a reef in French Polynesia which ended his sea journey.

I read his account of that journey,  Kon-Tiki, when I was in sixth grade for a book report and it really took hold of my imagination. The story by the Norwegian explorer and writer in his expedition across the Pacific Ocean from South America to the Polynesian islands wasn't intended as an adventure trip. Heyerdahl, a Norwegian ethnologist, had set out from Peru in April hoping to prove that early South Americans could have traveled across the Pacific and settled in the Polynesian Islands.

The raft itself was historically accurate as they could make it. It was made entirely of pre-Columbian materials. The body was made of balsa logs lashed together with hemp ropes, and had gaps between the logs for the water to drain out. The cabin was built of bamboo and had a thatched roof of banana leaves. The mast was made of planks of mangrove, and it held a square sail. It was a replica of the rafts that native Peruvians were using at the time of the first European contact in the early 1500s. The journey took three and a half months. They traveled 4,300 nautical miles.

In writing that post, I also found an article about a more recent explorer, David de Rothschild, who crossed the Pacific in a boat made from recycled plastic bottles. He is not an ethnologist but someone who wanted to call attention to the waste plastic that ends up in our oceans.

This journey appeals to the environmentalist in me. His 60-foot catamaran was built almost entirely with waste material. I like that he named his boat Plastiki (for plastic Kon Tiki). There were 12,500 reclaimed soda bottles that are built into the hulls. Parts of the boat are held together with a new glue made out of cashew nuts and sugar. An old aluminum water pipe became the mast, and more recycled plastic was used to weave the sailcloth.

They weren't trying to replicate any earlier explorers, so the boat had solar panels, a wind turbine and bicycle generators to provide electricity for the six crew members. There was a miniature greenhouse for some food, and a compost toilet.

Environmentalist David de Rothschild was the designer and sailor and he wanted the boat to be as environmentally green as possible. A team of engineers and marine architects helped build it and they tried to use the same materials that form most of the global marine pollution - the plastic of food and drink packaging.

Plastiki puts a focus on the pollution but also that some trash can be a valuable resource for reuse instead of being dumped and becoming a pollutant. On its journey, Plastiki sailed through the Great Pacific Garbage Patch that has an estimated 100 million tons of plastic in an area twice the size of France.

It takes 450 years for a plastic bottle to degrade, but even then, like other plastics, it will remain in the environment in small pieces. One of the concerns about ocean pollution is that those final tiny particles of plastic float around the surface where they are ingested by fish and marine life. Plastic makes up to 80 percent of all marine pollution and at least a million seabirds and 100,000 mammals are killed every year by eating plastic or getting caught up in it.

Though our Atlantic Ocean doesn't have a Garbage Patch like the Pacific, it certainly has a lot of plastic pollution.

If you want to armchair either voyage:

Kon-Tiki: Across the Pacific in a Raft

Plastiki Across the Pacific on Plastic: An Adventure to Save Our Oceans